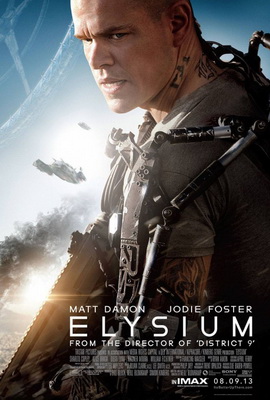 Elysium is the second recent offering of futuristic science fiction with a single-word, four-syllable title - Oblivion being the other. Oblivion was set in the year 2077 on a post-apocalyptic Earth; Elysium takes place in 2154 on a version of our planet which has managed to avoid complete and total self destruction, but, in no small measure, is suffering from the ills of overpopulation, governmental corruption, and corporate exploitation.

Unfortunately for Elysium, the differences don't stop there. Oblivion is an intriguing, thought-provoking story which left me trying to figure out how the different pieces of the plot supported one another. Elysium, on the other hand, is a somewhat imaginative, but ultimately simplistic and contrived story which left me thankful for the fact that the movie had finally ended.

The basic premise of Elysium is interesting enough. By a century and a half in the future, the "two worlds" phrase sometimes used to describe the gap between rich and poor has taken on a quite literal meaning. People of wealth and privilege live as citizens of Elysium - a enormous space-station in Earth's orbit. Life on Elysium is Utopian; there's luxury, security, and opportunity. Crime is effectively nonexistent and medical science has progressed to the point where any physical ailment can be completely cured in seconds.

Standing in stark contrast to life on Elysium is life as the remainder of Earth's population knows it. Too many people, too few resources, and an epidemic of corruption have left the average person struggling to survive, with little hope for improving his or her circumstances. The lucky ones have jobs. But concern for worker safety is a complication of the distant past. Employers universally exploit their employees who are forced to risk their lives and their livelihood far too often for far too little. Lastly, a touch of a totalitarian state where order is kept by a legion of cold and calculating robots rounds out this grim vision of the future.

Max Da Costa (Matt Damon) is among the hapless, Earth-bound masses. Raised as an orphan and burdened by the criminal past of a predictably misspent youth, Max is trying to turn over a new leaf and function as a contributing member of society in 2154 Los Angeles. But the niceties of such good intentions are cast by the wayside when Max becomes the victim of a tragic industrial, work-related accident. Quite suddenly, Max is forced to abandon his ideals and resurrect dubious connections to L.A.'s underworld in a desperate bid to secure passage to Elysium.

Jodie Foster plays the supporting role of Jessica Delacourt, the power-hungry and manipulative Secretary of Defense on Elysium who plans to work around the inconvenience of the space-station's democratic methods. She has a palpable disdain for the people whom she serves and the processes through which she was empowered.

To be honest, it's difficult to take the Delacourt character too seriously. Part of the problem is that Foster is just not a good fit for the role. There is something about her playing this type of villain that just plain doesn't work. But it's not entirely her fault. Foster's acting talents, as considerable as they are, are insufficient to counterbalance the simplistic nature of the character as written.

Which brings me to the main problem with Elysium: it feels like a caricature. The good, such as the ideals of life on Elysium, is too good. Similarly, the bad is too bad and the evil, too evil. Characters are one dimensional and consequently, predictability is never far. The movie comes off like the screenplay was written as a first draft where extremes are used to overemphasize the intended themes; but then nobody ever went back to refine it into a well-crafted story. To be honest, I'm a bit disappointed that a star of Matt Damon's magnitude would lend his creative talents to a movie with such a weak screenplay.

On a related note, the Elysium marketing effort included Sony creating the website Welcome to Elysium, which is a mock online-brochure touting the benefits of life on Elysium. It's not especially detailed, but as far as movie marketing goes, it's interesting.

The Sopranos Ending - Made In America

The Up Side of Down Book Review